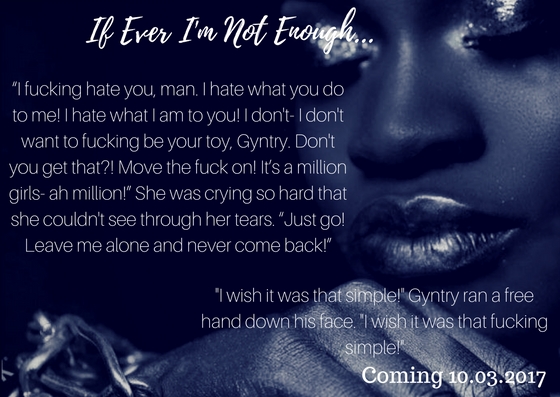 “What are you doing here?”

“What the fuck you mean what am I doing here? I need to know why you avoiding me and shit.”

Tucking her bottom lips into her mouth, she gnawed on it for a moment before releasing it. “I told you that I didn’t want to do this with you anymore. I thought we were clear.”

Gyntry placed his hands on his chest. “Aint shit clear to me but the fact that you been avoiding me. I told you what it was when you was talking that bullshit. Nothing changed.”

“Something did change”, Aelayah snapped, unaware of how much power and emotion were in her voice. “I fucking changed and I don’t like it. I don’t want it. I’m moving on!”

Hyden stood from his seat, waiting to be addressed so that he could insert himself into the conversation. “Everything ok, Aelayah?”

Aelayah pressed her hands into her temple, not in the mood for the extra bullshit she knew she was about to endure. “It’s fine, Hyden. Just give me a minute. In fact, can we reschedule this meeting for later in the week? I’ll call you when-”

“You can call that nigga but not me?” Gyntry stepped back and shook his head with a smirk. “Ain’t that some bullshit?”

“Why don’t you have him come back, Aelayah? We have more pressing manners to attend to.”

“Don’t speak bout me”, Gyntry threw out at Hyden. “Don’t even use him in a sentence around me.”

Hyden didn’t like Gyntry’s tone and didn’t hesitate in expressing that. “You come in here practically yelling about irrelevant bullshit while we are trying to conduct business.” Hyden took a step closer to them. “You can leave and come back later for that shit.”

Gyntry made a move to go around Aelayah, until her voice halted him. “Gyntry, please. We can talk, i’ll – we’ll talk in my office. Just come on, come back and we’ll talk.”

She grabbed his arm and pulled him to her, but he snatched away from her. “How bout you take yo ass up out of here before I beat the shit out of you just for being around her witcho square ass. Don’t fucking speak to me!”

“Fuck you”, Hyden spat right before Gyntry’s fist connected with his jaw, sending him flying into the table he was just sitting at. Gyntry didn’t give him time to recover before he was on his, sending a two piece against his face that caused blood to leak from his mouth.

“Gyntry”, Aelayah screamed as she grabbed on his shirt. “Stop!”

Hyden tried to cover his face but the blows were coming to hard and too fast. His head bounced against the ground as Gyntry hovered over him, transitioning between throwing punches and stomping him. The taste of blood was so heavy in his mouth that he thought he would gag on it. He felt his head became light as another punch sent his head back into the concrete of the floor.

“Gyntry!!!” Aelayah shouted again before she jumped on his back and wrapped her arms around his neck tight. “Stop!”

Gyntry had no choice but to let up once he realized he couldn’t breath. He didn’t want to hurt Aelayah but she was cutting off his air. “Let go!”

“You have to stop”, she shouted in his ear. “You’re going to kill him!”

“I told that mothafucka to stop talking to me”, he snapped as her grip around his neck loosened. “Get off me, ma.”

“No Gyntry! Go to my apartment! Now!”

“Would you fucking listen for once? Listen to me for once and just go upstairs!”

Aelayah jumped down from his back. Gyntry turned around, his chest moving up and down rapidly while he watched her. “Go upstairs!”

“I don’t give a fuck, Aelayah. You know that shit”, he spat.

Aelayah pushed him in his chest and of course he didn’t move. “I know that all too well!!” she screamed, her voice raw with emotions. “I know you don’t give a fuck about me. About my business! I know that I don’t fucking matter to you so what the fuck are you doing here? Why would you do that to him?”

Gyntry stood before her still huffing and pissed off, getting more pissed by the second. “I told him to fucking stop talking to me! Simple shit but he didn’t listen!”

“So you do this to me?” Aelayah wiped a tear from her cheek. “You come here and do this shit, destroying my bakery because you felt disrespected?”

Gyntry squinted his eyes. He hadn’t considered her at all when he made his decision to beat the fuck out of ol dude. He wasn’t prepared for the pain that was showcased all over her body or the hurt and tears in her eyes.

Aelayah exhaled, trying to calm herself down. “Is this how you like to see me? Fucking broken and weak? This what makes you happy right?”

Hyden groaned on the ground and rolled over on his side as Journée bent down to stand the table back upright. In this moment, she regretted the moment she got involved with Gyntry. All he brought her was pain and heartache.

“I still need to know why you been trippin and shit”, Gyntry asked with a shrug of his shoulders.

Aelayah looked at him like he’s lost his mind. “Are you fucking serious?”

“I FUCKING HATE YOU!” Aelayah yelled as she got in his face, a cry brought through her voice as tears rolled down her face. “I fucking hate you, man. I hate what you do to me! I hate what I am to you! I dont- I dont want to fucking be your toy, Gyntry. Don’t you get that! Move the fuck on! It’s a million girls- ah million!” She was crying so hard that she couldn’t see through her tears. “Just go! Leave me alone and never come back!”

“Why isnt it”, Aelayah shouted. “You dont want me! You told me that much, remember?!”

Gyntry stood there silent, thinking. Thinking. Something that he didn’t do often. His mind worked overtime, being that his heart had not been felt but he never really had to think much. It was his way. He just did things his way and nothing else mattered to him. Nothing. “I came here to talk to you. I didn’t come here for this shit.”

Gyntry shook his head before he began to walk off, he stopped when he got to the door. “I’ll pay for everything that was broken, just send me the bill and shit. I won’t fuck with you no more.”