Hey Guys! As we bend the curve of the fourth leg of this race, I want to say that I appreciate every single one of you that took the time to read this series and support me on this journey into Paranormal. I enjoy writing in this genre and it looks as if you guys enjoy reading this genre from me so Paranormal & I will be together for a long time.

So…with that said. I have one final teaser of Still Stoned: Breaking Stone for your reading pleasure. Don’t forget. 02.14! The Stoner in you will need to be indulged. 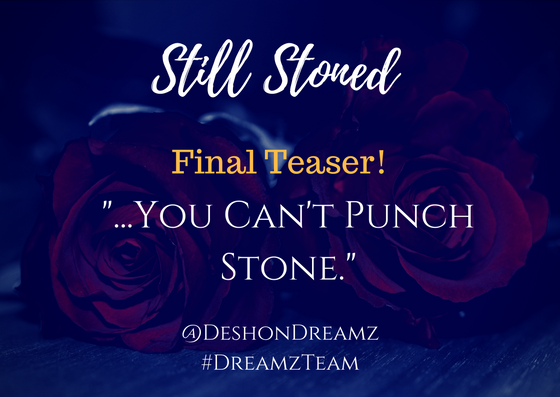 His entire body ached from having to maneuver his large frame on the couch all night, knowing that Eryanna wouldn’t want him anywhere near her. He was embarrassed, ashamed but he was also partially in agreement with Stone and his actions. What Eryanna’s father said to her was disrespectful and uncalled for in his eyes. He knew of Yatti, knew of the things that he had Eryanna into but he didn’t hold that against her because she was young and finding her way through life, just like she was now. He didn’t have to know her back then to know that she had changed and grew for the better, he could see that by looking into her eyes. Yes, she had been through some things and put her loved ones through some things but who was he to judge her with a past as ugly as his.

“I went through your phone and called Lyles and Heather, letting them know that you were ok. They wanted to speak to you but I told them that you were sleeping. They said that they didn’t trust that so they are on their way here.”

She just looked at him as if he weren’t the same man that had the ability to drive her crazy with a kiss or gentle touch. She looked at him as if she didn’t know who he was and that part hurt Raheem to the core of him. Her gaze didn’t waver, it stayed dead center on him.

“I apologize, Eryanna. I plan to reach out to your parents as well to extend my apologies to them. What I did was reckless and –”

“You know about Yatti?”

He didn’t react. Didn’t flinch at the mentioning of him. Raheem smoothly tucked his hands into his pockets as he looked over at her, his expression blank. “Yes.”

“But you never told me you knew!” Eryanna snapped as she walked up to him. “I even asked you! When you told me that you looked me up, I asked you what came up and you led me to believe that nothing came up when I fucking knew better!”

“Eryanna,” he pleaded, his hand reaching out to touch her but she snatched away from him.

“The woman that I am to you was molded by the girl that I was to him. This shit-” Eryanna shook her head with an exhale. “Do you not see how fucking unhealthy this is? Raheem, you are crazy, dude! Fucking crazy!”

“You say that but your actions are always different. Your actions always say something different from what comes out of your mouth!”

Raheem scrubbed his hands over his face with a grunt.

“And what happened to my hand? I hit you and it breaks! Then I wake up and feel nothing but you wrapped it.”

“I wrapped it in case it didn’t take.”

Raheem again moved his eyes away from hers, not wanting to say what was needed in order to give her clarity or…confuse her more. “You can’t punch people, Eryanna. You especially can’t punch Stone!”

What are you waiting for?! Stoned” Your Heart Belongs To Me