“We’ll cave somewhere between pleasure and pain, Stoner. But we won’t have regrets. I can promise you that.”- Stone. 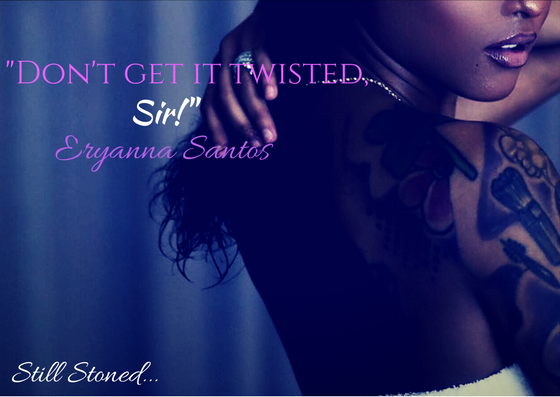 With Serenity’s attempts at ruining everything that she had developed with Raheem, Eryanna didn’t have an ounce of trust for her. She knew that she wanted Raheem and it didn’t seem like he was doing much to let it be known that he wasn’t available. Every time they met, it was on her terms and Eryanna knew that Serenity didn’t have respect for her so she was saying and doing any and everything to get Raheem. A large part of Eryanna was insecure when it came to Serenity because she knew that somewhere inside of Raheem, she dwelled. Rather it was a large part of him or a small part, she still held importance to him when Eryanna wanted to have all of him. She couldn’t get that part. She also didn’t have his daughter. Some days, Eryanna wondered if she made the right decision to continue taking her birth control when Raheem was trying to get her pregnant. Now, he wouldn’t touch her without using protection. She didn’t know why he was keeping her around but she knew that despite the fact that he says that he loves her; she was not as much a part of him as Serenity and the child that they shared. That reality made her feel small, weak.

Eryanna snatched her jacket off the chair in the corner and turned back to him. “Where are my clothes?!”

“Oh,” Raheem exclaimed with a smile. “You talking about that piece of string you called a dress? That’s in the trash compactor.”

“It’s in the trash where it belongs!”

“You threw my dress away?! Raheem, that dress was two hundred dollars!”

Raheem face morphed in confusion. “For fucking what?”

“I got it custom made for my birthday and you standing here telling me that you threw it in the trash?”

Eryanna tossed her head back in frustration. She inhaled before tilting her head to the side to look at him. “You know what; I don’t even have the energy to deal with this shit right now. I’m going home.”

Raheem shook his head. “Here you go with the dramatics, huh?”

Eryanna pulled a hoodie from his top drawer and snatched it over her head. “Whatever!” She then moved to pull on a pair of his sweats that were too big but she didn’t have a choice but to put it on. Finally, she tugged on her jacket. “I paid for that dress,” she yelled, suddenly overtaken by emotions. “It was mine! I did it on my own, Raheem! It wasn’t yours to destroy!”

Raheem stuffed his hands into his jeans, listening to her. “That dress was inappropriate.”

“But it was mine!” She returned as she took her frustration out on her jacket, pulling it into position. “It belonged to me! It had nothing to do with you! Nothing!”

Raheem squinted. “So, you’re upset because I threw it away?”

Eryanna’s eyes bucked. “What do you think the premise of this conversation is, Raheem? Are you slow?!”

“You don’t have to be insulting.”

“Godddd, Raheem,” she shrieked in exhaustion. She stopped to look him over. Everything about him pulled at her. From his looks to his aura. He was everything that she needed wrapped in a man too controlling and possessive to ever allow them to have freefalling joy. Love restricted between the Valley and private moments, nothing beyond that. “It’s like…you don’t get it. You don’t-”

“Then explain it to me! What was so special about that dress?”

“IT”S NOT ABOUT THE DRESS,” Eryanna screamed before a sob broke through her lips. “God! It’s not about- the dress!” She swiped at her face with annoyance as more tears formed. “It’s about me! For once in a long time, I considered me without considering you and it felt good! It felt so good! I didn’t think about the fact that you have so many layers to you that I could never in this lifetime touch the core, without assistance from you. It wasn’t about your need to control me. It wasn’t about fucking Serenity, it wasn’t about the fact that she has your daughter and suddenly, I’m shut out because I don’t want children yet. It wasn’t about anything but me! I did that for me! I got that dress made for me and somehow you insert yourself anyway!”

“Yes! You insert yourself! Why is that news to you?!”

Raheem looked up at the ceiling, before looking back down at her. He was trying to remain calm but that was becoming more and more difficult for him. “Baby, I don’t wanna fight. I’ll give you the money to replace the dress!”

Eryanna realized at that moment that she was speaking to a brick wall. “Just…let it go, Raheem.”

Raheem took a moment, allowing silence to take up the space between them. He knew what this was. She was lashing out, due to a lack of space combined with a lack of attention. Raheem didn’t know what she wanted from him. “Do you feel like you need space?”

Eryanna gave him a pensive look before she shook her head with a wave of her hand. “I don’t know, Raheem! You tell me!”

“Maybe I should give you space.”

Eryanna felt her heart slam in her chest, her mind giving in to her thoughts of insecurity. Her skin felt cold, hard in its purpose as her eyes found his. She took a small step, nodding her head as she went. “You really really got me fucked up! So, how does this go? I tell you that I need space and you go and fuck her?”

“Make another baby with her?!”

“Then its fuck me, Raheem! Don’t get it twisted, Sir! I put in too much fucking time! I love you. This spot belongs to me! It’s my shit! Fuck her! F.U.C.K Serenity!” She tossed her hair over her shoulder. “Don’t be in that bitch personal space, Raheem! You think you crazy?! I have the ability to rearrange some shit! I will fuck up you and your girlfriend. I ain’t no Meta, but don’t push me! She may be the first Stoner but I am THE MOTHERFUCKING STONER!”

Raheem stood before her torn. Pissed and turned on. Wanting to demand his respect and kiss her all over. Starting at her feet, then moving up the thickness of her thighs before touching Heaven. From there, he would slip on slopes known to take down the best of men. He wanted it all. He wanted her. He was upset. He was…proud. “The Stoner, huh?”

Eryanna nodded her head with aggression. “You got damn right, Sir!”

She went to storm around him but he caught her at her wrist, bringing her back in front of him. He dipped his head to plant a kiss on her fingers before he smirked. “Oh…Stoner.”