This is an extended version of what happened after Raheem received the resignation letter from Eryanna. Right after he advised her that he wanted her “down.” 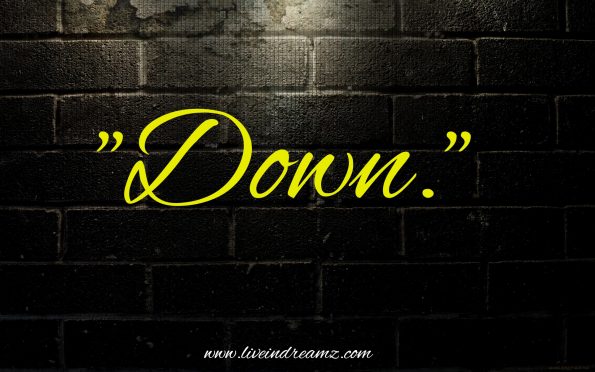 Down was more than a direction. It was a position. The one Stone required that Eryanna be in. On her knees, her hands behind her back, her hair wild and free. Head down.

“Eryanna.” Stone walked behind her, feeling his presence, goose bumps formed all over her skin as he bent to pull her hands to the front of her so that he could bound her wrist with the silk scarf he found on her bed. “You turned in a request that I warned you not to turn in.”

Eryanna knew better than to reply. It wasn’t a question. It was a statement that rang loud and clear in her eyes. In the eyes on Stone, it was a betrayal in a sense. She didn’t mean for it to come off as such, she just knew it was time for them to part ways. She didn’t think this would be how her night ended. Back in his presence and under his control. She was down to just her panty and bra set, her nerves danced around in the pit of her stomach as her palms began to sweat.

“You literally did the exact opposite of what I asked you to do.

Eryanna kept her eyes down, most of her face covered by her hair.

He pulled the tie tighter, causing her to gasp and look up at him.

Eryanna slowly did as she was told as he gripped the tie and walked her toward her bed. He stood her with her back to the bed as he stood in front of her. His eyes connected with hers, he knew she wanted to speak. He reached out and pushed her hair out of her face before he reached to undo her bra. “Speak.”

Stone frowned as he stopped moving. “It was a direct move against me and my office.”

Eryanna stopped speaking when he reached out to grasp her panties in his hand. She swallowed. “I didn’t mean for you to be offended.”

In one swift move, her panties were ripped from her body, causing her to yelp before Stone grabbed her hands and put them above her head. “Grab the rail.”

Eryanna looked up, seeing that the railing of her reach. She looked back at him with pleading eyes. “Perm…permission to speak.”

His voice always made her nervous. Deep. Controlled. Levelled. Too got damn sexy.

Stone gave her statement no regard. “Grab the rail.”

Eryanna went to speak again until she was lifted into the air. She grabbed the rail with both hands before she looked down at Stone. “Please Stone.”

He gripped her thighs in his hands and lifted them so that they sat on her shoulder and her pussy was in his face. He stepped forward, inhaling the scent of her before his tongue snaked out of his mouth to sample her.

Eryanna was already having a hard time keeping her hands on the rail.

Stone gripped her ass and pushed her pussy into his face as he devoured her, smacking her ass when her legs began to shake prematurely. He removed his tongue from her. “Why are you shaking?”

Stone frowned as he moved back from her. He allowed her legs down so that she could stand on the bed. “Don’t move.”

Eryanna stood there, trying to get her heart to calm down, trying to keep her eyes on him but when Stone told her not to move, she knew better than to do so.

Stone went into her closet and grabbed a belt. Testing it against his hand before he returned to Eryanna. “I bet not feel your thighs shake against my face, Eryanna.”

Eryanna glanced at the belt, then back at Stone, nodding her understanding. “Hold the rail, legs up.”

Eryanna grabbed the railing tighter and pulled her legs up as Stone guided them to rest on his broad shoulders before he returned to feasting on her. His tongue drove into her before he moved it back out to pay special attention to her clit before he repeated the action. Eryanna’s head fell back as she moaned, fighting against the urge to grind her pussy into Stone’s face.

Eryanna gripped the railing tighter as her thighs began to shake. She knew it was coming but she still wasn’t prepared for it. The sting of the belt against her thigh made her yelp as she pulled up in the railing. “Stoneeeeeeeeeee!”

She couldn’t control her legs. Not with his tongue on her.

Her arms weren’t tired at all because all of her weight was on him. “Permission! Permission please!”

He removed his tongue from her, allowing her to feel a moment of relief before he placed two fingers inside of her. Eryanna’s eyes went wide as she took in a deep breath. As soon as she felt like she couldn’t take any more, Stone began to do a come here motion with his fingers planted deep inside of her.

The sting of his belt only made her need for release just that greater.

Her head fell back.

Stone let a beat pass before he spoke. “Granted.”

Eryanna came hard. Her entire body quaked as he held her hands slipped from the railing but Stone continued to hold her upright as her body jerked in midair.

“Uggghhhhhhhhhhh”, Eryanna groaned as her arms came down and her body spiraled into ecstasy.

Stone watched her with content in his heart. He was far from done with her.

Eryanna could barely register his words as her body endured aftershocks of her orgasm.

Eryanna grabbed the railing and watched as he allowed her weak legs to slide off his shoulder so that she could stand. He removed his clothes and produced a condom which he slid onto his dick. Stone was very well endowed. It was too much to handle, too much to take. But Eryanna wasn’t fool enough to reject him.

“What you did was a direct insult to me. Even if that wasn’t your intent, that’s how I took it. So, how does one handle that type of thing, Eryanna. Surely I can’t allow it to slide.”

Eryanna didn’t trust her lips to form words so she just stood there heaving, her chest rising and falling rapidly as she made attempt after attempt to catch her breath.

Eryanna gripped the railing, feeling herself being lifted in the air once again. Only this time she was lower, leveled with Stone so that his dick met her entrance.

Without hesitation, he slid into her, gripping her thighs in a hook around his arms as he began to move into her.

Shuddered breathes left Eryanna with each stroke as her eyes lowered to meet his.

Eryanna closed her eyes as he began to slam into her, gripping her thighs tighter as his arms flexed, his hips twisted, hitting her at an angle that caused her to yelp before she moaned deep within her throat.

“Yes”, Eryanna screamed as he began to ram into her at the speed of a piston. “Yes! Yes! Yes!”

Eryanna brought her eyes to his, looking at him through her hair that was now sticking to her face. Eryanna’s mouth dropped open before she bit down hard on her lower lip.

“Already, Stoner? I just got in you.”

Stoner was the most conflicting thing he could call her. It was an insult and a term of endearment all in one. As he explained it, Stoner because you stay high and as your boss, knowing that I should fire you. Stoner also because your mine. You belong to Stone. Property of Stone. Mine.

Stone looked into her eyes. “Mine.”

Her hands slipped from the rail, she was falling back but her orgasm was so strong that she couldn’t catch herself. Her breathing seemed to slow. Everything happened so fast that it literally had her delusional.

Her tongue seemed thick in her mouth, she couldn’t speak.

Before she knew it…she was screaming his name at the top of her lungs.